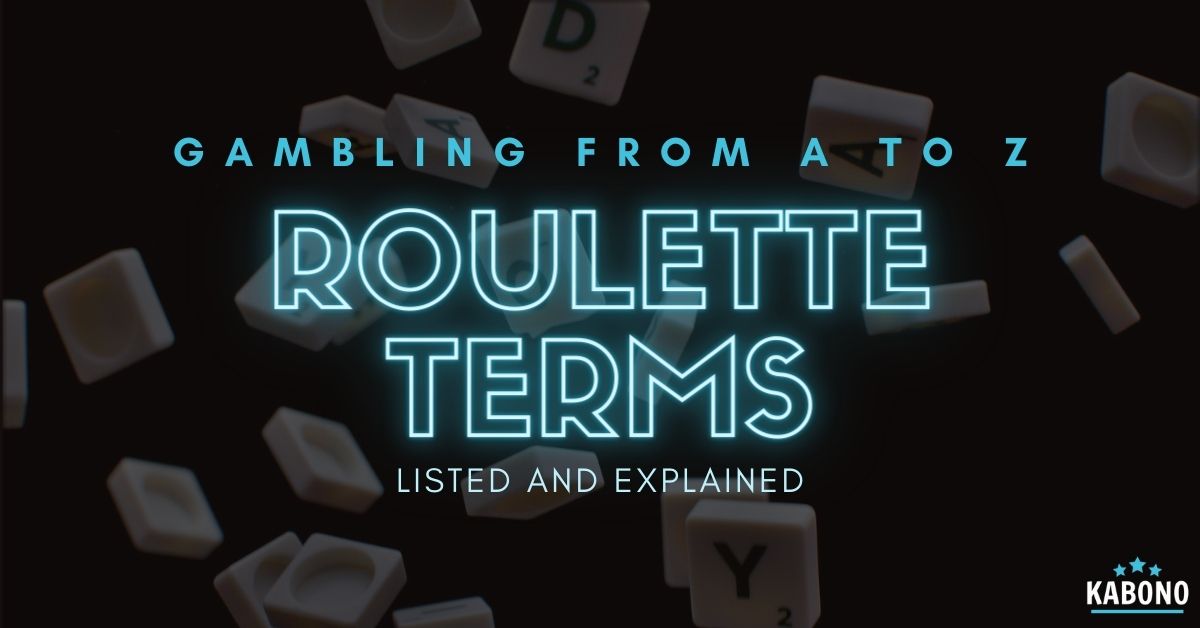 Roulette is one of the most classic and prestigious casino games around. The game has a long history dated all the way back to the 18th century. Today, any respectable land-based and online casino will offer at least a few roulette table games. It’s quite an easy game to play, but in order to really get the hang of it, there are quite a few terms you should know and understand.

In this guide, we will walk you through some of the most common roulette terms listed from A to Z. Learn them all to become a roulette pro or get started with just the basic terms at the end of the guide.

American roulette: A common roulette version. In this game version, the wheel has a total of 38 pockets, due to the extra double-zero (00) pocket. This means that American roulette has two green zero-pockets (0 and 00), and thus a higher house edge.

Backtrack/ball-track: The outer rim of the roulette wheel where the ball spins around until it loses momentum and ends up in a pocket.

Bet: When playing roulette, you place a bet – a wager – on one of the betting options available. All bets are based on an outcome of where the roulette ball will end up, with varying degrees of difficulty from even money bets to straight bets. In roulette, bets can be placed either “inside” or “outside”.

Biased wheel: A wheel where not all numbers are equally likely to win on any given spin. In regular (unbiased) wheels, the result is 100% based on chance but some wheels are biased (due to defects or cheating).

Black bet: An outside bet betting that the ball will end up in a black-coloured pocket (as opposed to red).

Blaise Pascal: The person who it is believed invented the first form of roulette while on his search for a perpetual motion machine.

Bonus: When playing roulette at online casinos, you can often get a bonus (extra money to play for, lost money back or similar).

Colour bet: An outside bet betting on a specific colour (red or black)

Croupier: The person who runs the roulette table and spins the wheel (dealer).

Double zero: In American roulette and some other versions of the game, there are two green zero-pockets (0 and 00).

Dolly: A marker placed on the winning number on the table layout while sorting winning/losing bets. While a dolly is on the table, no bets can be placed or removed.

En prison: A special rule normally used in European roulette only. With this rule, players who place even money bets will get their bet frozen (“in prison”) if the ball lands on zero. In other words, they get a second chance in which they can win their bet back. Sometimes they can also claim half their bet back directly (instead of freezing the bet).

Even bet: An outside bet betting that the ball will end up in an even-numbered pocket (as opposed to odd-numbered).

Even money: Even-money bets are bets with an either/or result (red/black, odd/even, high/low). These are the “easiest” bets as the odds is almost 50%, minus the house edge from the zero pocket(s).

French roulette: A common roulette version. In this game version, the wheel has a total of 37 pockets, with only one zero-pocket (0).

Gamblers fallacy: The (incorrect) belief that a past event will influence the outcome of a future event. This is commonly linked to roulette, where some players believe that which pocket the ball will land in is linked to which pockets it has landed in previously. Learn more about gamblers fallacy.

House edge: A term used to describe the mathematical advantage that the game/casino has over the player. Additional zero-pockets increases the house edge while rules such as La Partage lowers it.

Inside bets: In roulette, bets can be placed either “inside” or “outside”. Inside bets are “more difficult” to place correctly as they have lower odds, but consequently, they have higher payouts. Some examples of inside bets are straight, street, corner and basket.

Layout: The area on the roulette table where bets are placed is known as the layout. In land-based establishments, the layout is traditionally a green filt cloth.

La partage: A special rule normally used in European roulette only. With this rule, players who place even money bets get half their bet back if the ball lands on zero.

Live roulette: A special category of online roulette games where the game is played and streamed live from a casino studio. A real live croupier spins a real wheel but players bet online.

Marker: The tool used by the croupier to mark the number winning of each spin (see Dolly).

Martingale: A betting system commonly used for roulette. With this system, players double their bet after each loss until a bet wins again. The system is meant to be used to win back losses, but it might require many rounds (and a large budget) to be able to do so.

Mini roulette: A version of roulette that uses a smaller wheel of just 13 numbers (0-12).

Odd bet: An outside bet betting that the ball will end up in an odd-numbered pocket (as opposed to even-numbered).

Pill: Another name for the “roulette ball”.

Pockets: The coloured and numbered areas of the roulette wheel where the ball can land.

Red bet: An outside bet betting that the ball will end up in a red-coloured pocket (as opposed to black).

Roulette: The name of the game, which means “little wheel” in French.

Straight/single bet: An inside bet betting that the ball will land on a specific number. This is the most difficult bet to place.

Street bet: An inside bet betting that the ball will end up in one of three consecutive numbers in a horizontal line (1-2-3).

Split bet: An inside bet betting that the ball will end up in one of two vertically or horizontally adjacent numbers (1-2).

Six line bet: An inside bet betting that the ball will end up in one of six consecutive numbers that form two horizontal lines (1-2-3-4-5-6).

Trio bet: An inside bet on three numbers including at least one zero.

Wheel: A big part of the roulette game is the roulette wheel. This is a physical (or virtual) wheel with 37 or 38 numbered and coloured pockets where the pill can land.

Zero: The roulette wheel has one (or two) green pockets with number 0 (and 00).

While it sure is nice to know all the above terms and casually introduce them in conversation while around the roulette table, you will definitely get by just fine without knowing them all. At the same time, there are some basic roulette terms that you need to understand in order to start playing:

Do you feel ready to join the roulette table? Browse our top lists of roulette casinos and sign up at the site of your choice to start playing!